Start at the beginning#

Every Divblox project starts with the data model. A well designed data model can be the difference between an app that works brilliantly and one that just doesn't cut it. The Divblox data modeler allows you to create and manage your app's data model in a visual environment.
Once a data model is defined, the Data Modeler ensures that the underlying databases are synchronized to its specification and then generates the object relational model classes. This makes communication with your databases seemless and easy to manage in an object oriented way.

Entity: The definition of an object that will be presented by a class in code and by a table in the database

The data model allows you define the following:

The data model in the above example describes the following:

The Divblox data model is broken up into 2 main parts:

Below is a visual representation of the Divblox System Entities. These entities should not be edited, but rather reused where needed, since they might be affected by future Divblox updates. The developer is free to create relationships to these entities to leverage their existing functionality.

The final data model for your app will be the combination of the system entities and the project entities. Once this is defined, Divblox can generate the app's object relational model and CRUD (Create, Read, Update, Delete) components.
In essence, simply by defining a data model, you already have CRUD ability for every entity in your data model. More on this in later topics. Below is a visual representation of a complete Divblox data model for the example provided above. 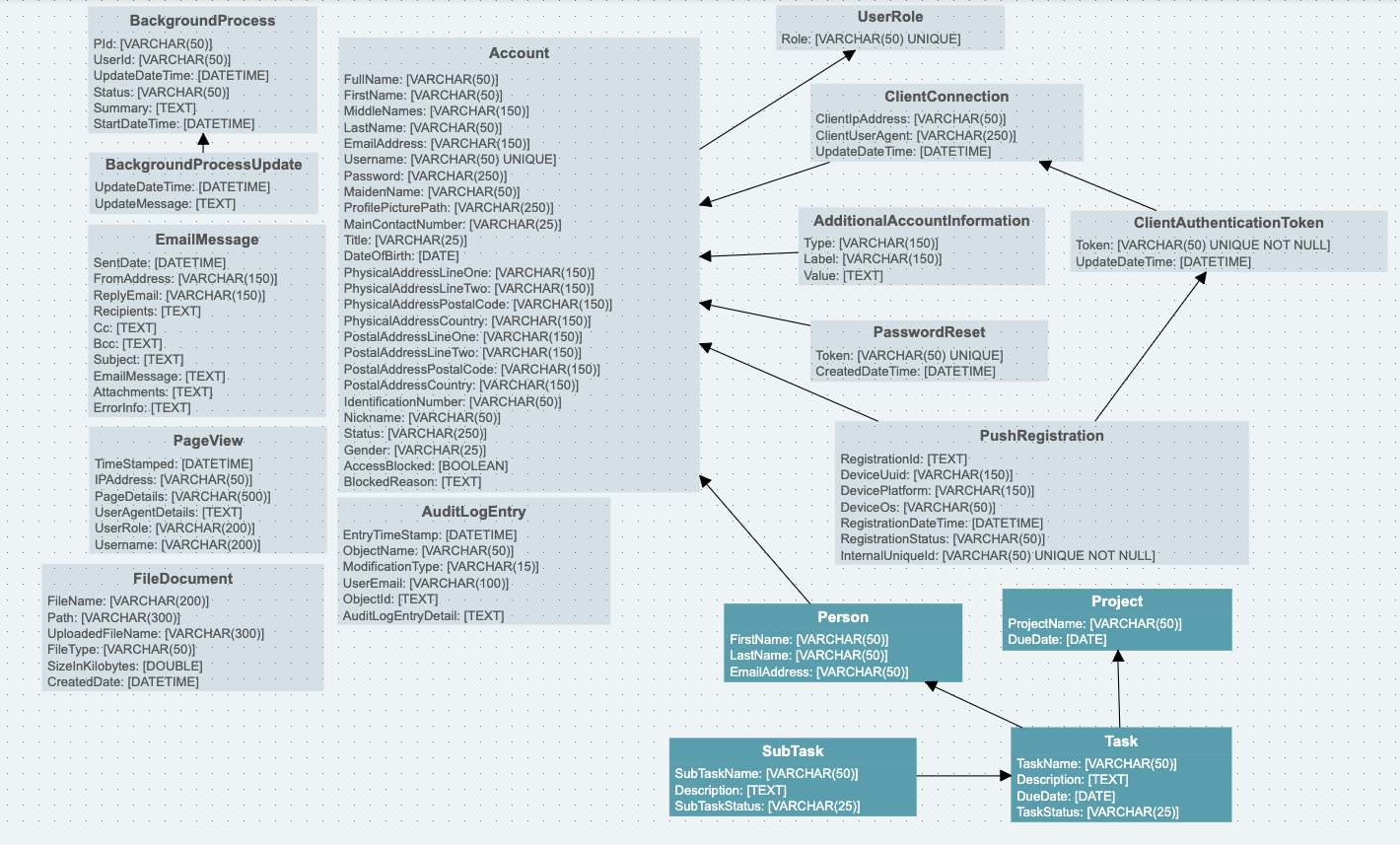 The Divblox ORM (Server side)#

Based on the data model, the following is generated or can be generated as required:

Each entity will have its own base classes for the ORM. These base classes will always be regenerated when code is generated to ensure that the foundation of your solution is always inline with the database. Each entity will then also have implemented classes that inherit from their base classes. These classes allow for the developer to change the way a certain class works from the default way, since the code in these classes will never be regenerated. This base class/implemented class approach is true for every area where Divblox generates ORM code.

The querying logic behind all the Load methods in Divblox ORM classes is powered by dxQuery, or dxQ for short. Put simply, dxQ is a completely object oriented API to perform any SELECT-based query on your database to return any result or hierarchy of your ORM objects.

While the ORM classes utilize basic, straightforward SELECT statements in their Load methods, dxQ is capable of infinitely more complex queries. In fact, any SELECT a developer would need to do against a database should be possible with dxQ.

At its core, any dxQ query will return a collection of objects of the same type (e.g. a collection of Task objects). But the power of dxQ is that we can branch beyond this core collection by bringing in any related objects, performing any SQL-based clause (including WHERE, ORDER BY, JOIN, aggregations, etc.) on both the core set of Task rows and any of these related objects rows.

Every code generated class in your ORM will have the three following static dxQuery methods:

The next few examples will examine all three major constructs (dxQ Node, dxQ Condition and dxQ Clause) in greater detail.

Notice that dxQuery doesn't have any construct to describe what would normally be your SELECT clause. This is because we take advantage of the code generation process to allow dxQuery to automagically "know" which fields should be SELECT-ed based on the query, conditions and clauses you are performing. This will allow a lot greater flexibility in your data model. Because the framework is now taking care of column names, etc., instead of the developer needing to manually hard code it, you can make changes to columns in your tables without needing to rewrite your dxQuery calls.

dxQ Nodes are any object table or association table (type tables are excluded), as well as any column within those tables. dxQ Node classes for your entire data model is generated for you during the code generation process.

To get at a specific dxQ Node, you will need to call dxQN::ClassName(), where "ClassName" is the name of the class for your table (e.g. "Task"). From there, you can use property getters to get at any column or relationship.

Naming standards for relationships are the same way. The tokenization of the relationship reflected in a class's property and method names will also be reflected in the dxQ Nodes. So just as $TaskObj->PersonObject will get you a Person object which is the manager of a given Task, dxQN::Task()->PersonObject refers to the Task table's row where Task.id = Task.person_id.

All dxQuery method calls require a dxQ Condition. dxQ Conditions allow you to create a nested/hierarchical set of conditions to describe what essentially becomes your WHERE clause in a SQL query statement.

The following lists the dxQ Condition classes and what parameters they take:

For almost all of the above dxQ Conditions, you are comparing a column with some value. The dxQ Node parameter represents that column. However, value can be either a static value (like an integer, a string, a datetime, etc.) or it can be another dxQ Node.

All dxQuery method calls take in an optional set of dxQ Clauses. dxQ Clauses allow you alter the result set by performing the equivalents of most of your major SQL clauses, including JOIN, ORDER BY, GROUP BY and DISTINCT.

The following lists the dxQ Clause classes and parameters they take:

!>All clauses must be wrapped around a single dxQ::Clause() call, which takes in any number of clause classes for your query.